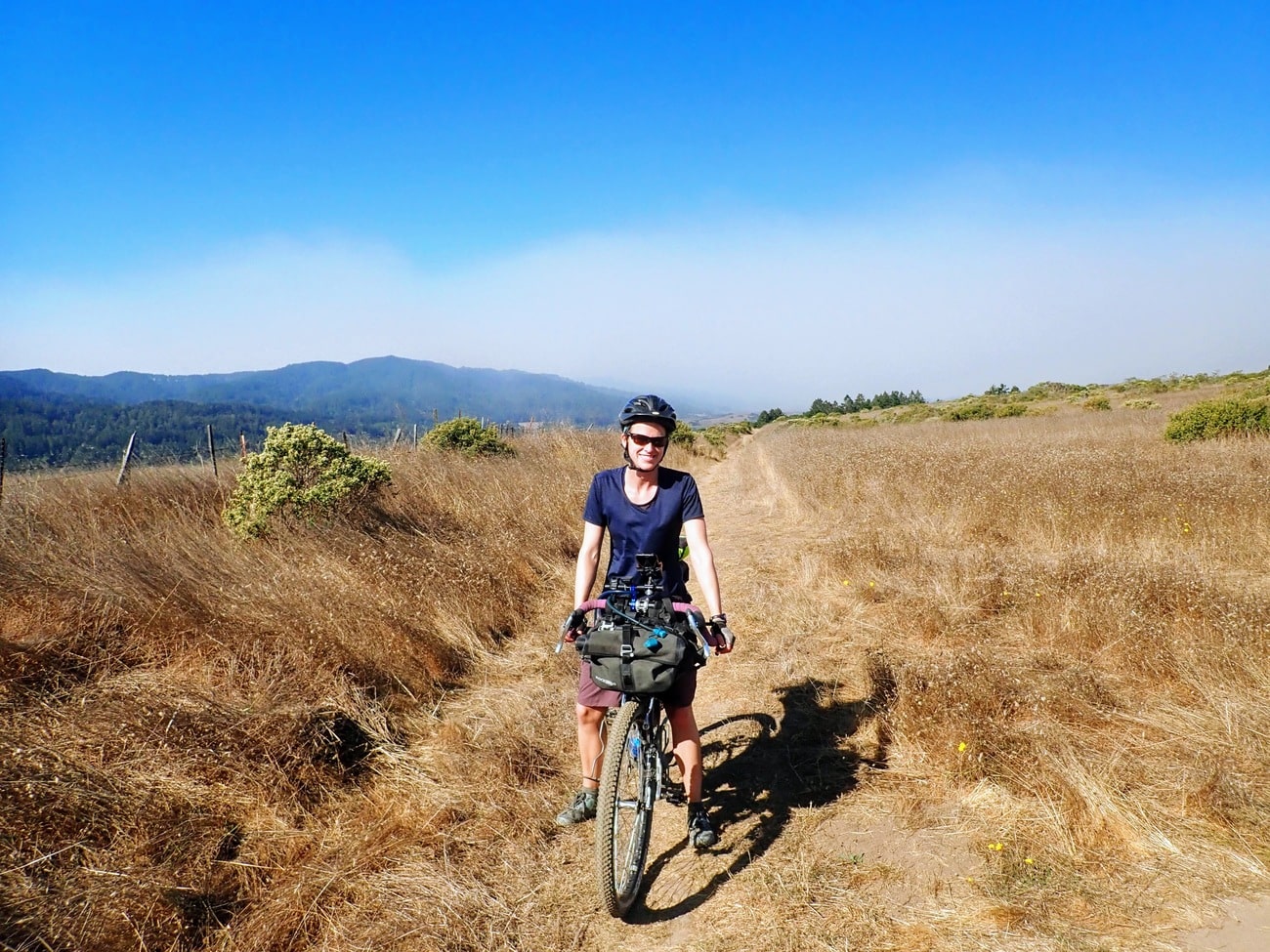 This convenient loop starts in Fairfax, cruises a bit of pavement en route to Samuel P. Taylor State Park, and then gradually ascends the Bolinas Ridge Trail for 10 uninterrupted miles before dropping down into the Mt. Tam Watershed on scenic fire roads.

The majority is dirt fire roads, sometimes smooth and sometimes bumpy, especially on Bolinas Ridge. The remainder is pavement and a little bit of singletrack.

This north bay bikepacking route is inspired by the MTB Project route here. Though it could be done as a long day ride, several appealing camping options make this a great overnighter and a varied tour of some of the north bay’s best trails and quiet roads.

If your schedule is flexible, clockwise is probably ideal. But if you’d prefer a shorter first day for whatever reason, ride counterclockwise.

Counterclockwise has two minor disadvantages that I noticed:

On the bright side, when riding counterclockwise you get to cruise the quiet paved descent from Bolinas Ridge, and some of the most scenic riding comes on the second day.

The most obvious camping options for this route are in the northern section of the loop:

For those looking to extend this route on the southern end via Ridgecrest Road, Pantoll Campground in Mount Tamalpais State Park also has hiker/biker campsites.

Free street parking in Fairfax shouldn’t be too hard to find within a few blocks of the loop’s start and end. Watch out for any time or permit restrictions.

The route leaves Fairfax on a mix of roads and local trails. After a stretch along paved Sir Francis Drake Boulevard, you’ll enjoy the car-free Cross Marin Trail all the way into Samual P. Taylor State Park, which makes a great place to camp if doing a shorter first day.

The Cross Marin Trail continues until mile 15, where a short road climb brings you to the Bolinas Ridge Trail. From here it’s 10 miles on a mix of singletrack and doubletrack, first along rolling hills with big views and then into shady forest and then breaking out to views of the ocean. It’s a gradual ascent with rolling climbs, some a bit steep but all are short.

Enjoy an easy paved cruise down to the Alpine Lake dam and a couple miles of flat riding. Next comes a steep but short climb, followed by a network of scenic fire roads with great views. After another short pavement section you’ll pass a golf course (water available) and then wind through local trails and fire roads back into Fairfax. Grab a beer, coffee, or meal to celebrate!

This route covers everything from smooth pavement to rutted dirt. I rode my Surly Long Haul Trucker touring bike with 2″ tires, which was a bit stiff on some sections of Bolinas Ridge, but otherwise great. A gravel bike would be a comparable choice.

If I’d had it at the time, I would have taken my Salsa Fargo for a slightly smoother ride on Bolinas Ridge. A hardtail mountain bike would work great too, especially if prioritizing comfort over speed.

You can ride this route year round, though I suggest not riding right after heavy rain, as the trail sections can get muddy and rutted.

There are a few sections of road riding, so a tail light and bright colored clothing aren’t a bad idea.

Bolinas Ridge has a couple gates that need to be lifted over, an argument for packing light if the climbs aren’t enough to convince you.

There are tons of options for extending or modifying this route. You could head down to Highway 1 and coastal trails, or south into the Mount Tamalpais area for more great trails and fire roads. Explore and experiment!