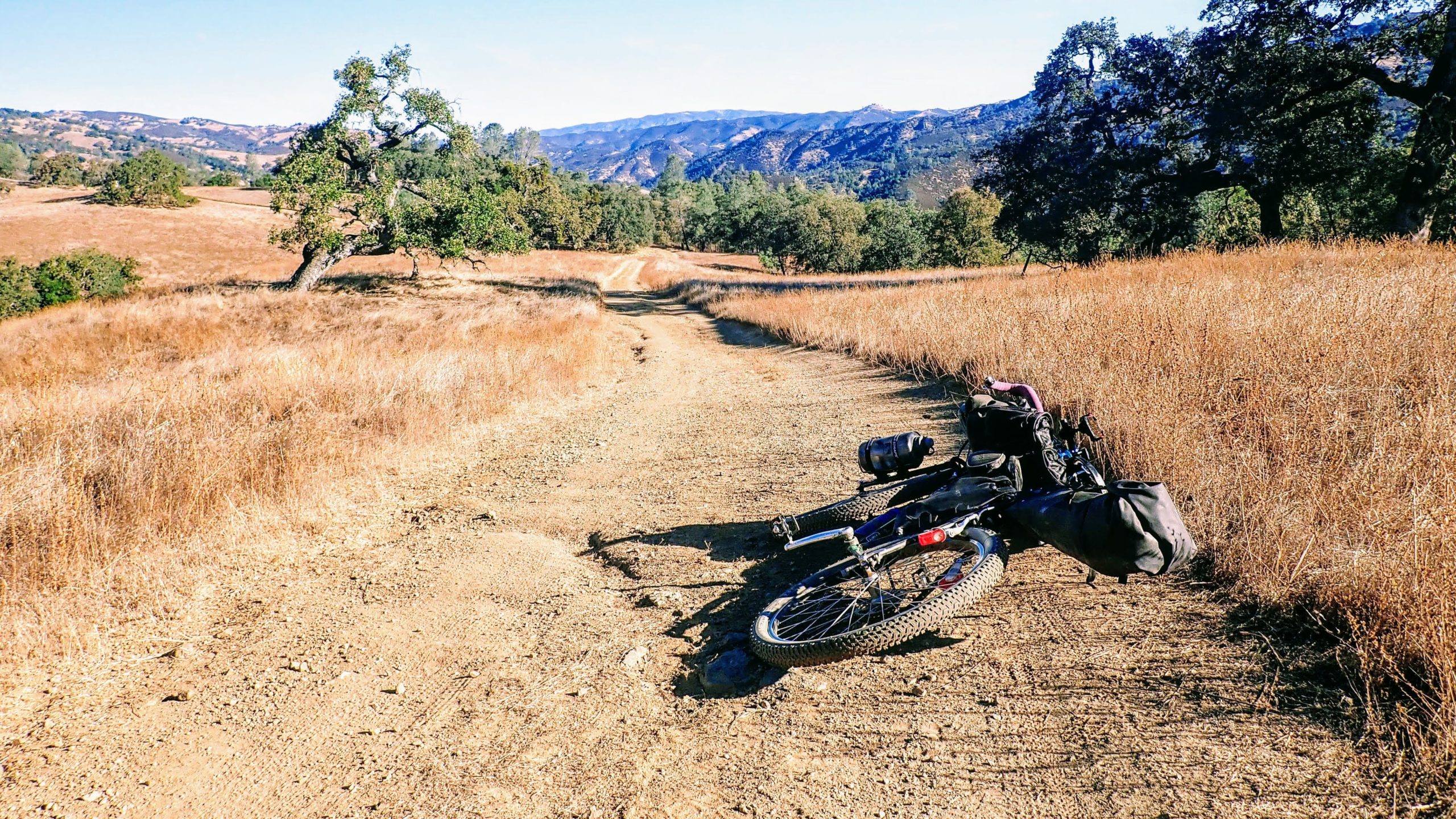 Let’s get this out of the way upfront: this 45 mile loop is organized around a 10ish mile stretch of fire road through Henry Coe State Park. About half of this stretch is brutally, soul-destroyingly, sometimes unrideably steep. Don’t say I didn’t warn you.

The rest of the route, aside from a couple nice miles in Coyote Lake Harvey Bear Ranch and Anderson Lake county parks, is pavement. Don’t say I didn’t warn you about this either. This is a route of contrasts. However, almost all the pavement is quite low-traffic, the stretch from miles 6-10 being the only exception.

So what’s the point exactly? Good question! Objectively speaking, it’s an odd route. Most of it is either too easy or too hard. But, it has a few things going for it.

If you’re looking for an overnight bikepacking adventure from the south bay area and don’t mind some hike-a-bike and suburban pavement, this route will deliver.

Elevation Gain: 6500 feet, with about half of that coming in the 10 mile stretch through Henry Coe

Singletrack: less than a mile

The legal dispersed camping in Henry Coe State Park is a central point of this route, so don’t miss it. Here are some options:

While likely not interesting to those riding this route as mapped, for those exploring alternate routes there is Lakeview Campground at mile 14 in Coyote Lake Harvey Bear County Park.

To spend the night in Henry Coe State Park you’ll need a backcountry permit. When entering at Coyote Creek entrance, stop at Hunting Hollow a few miles before and self-issue a backcountry camping permit, $5 per person per night.

The route starts at a large parking lot for Anderson Lake County Park, with restrooms and drinking fountains. I didn’t see signs prohibiting overnight parking, but there is a gate and the park does close at night. If feeling hesitant about leaving a car there overnight, there’s plenty of street parking in the surrounding neighborhood. I personally didn’t park here since I came from further north, so can’t guarantee it’ll work.

This loop can go either direction and both have advantages. The main consideration is whether you want more (gradual, paved) climbing on Dunne Ave, or more (steep fire road) climbing in Henry Coe Park. Note that whichever way you go, you’re in for some steep climbing in Coe, but slightly less if you go clockwise. Also, depending on your riding skills and bike setup you may even be walking some of the downhills in Coe, so it’s not like they come for free.

Personally I think counterclockwise flows a bit better. You get the suburban riding out of the way early, take the full brunt of Coe’s climbs, and get to reward yourself with a fun coast down paved low-traffic Dunne Ave toward the end of the loop.

Starting at Anderson Lake County Park, your wheels touch dirt immediately, though it doesn’t last for long. Warm up on low traffic rolling hills through an affluent neighborhood along the reservoir, then descend to busier Hill and Foothill roads for a couple miles (avoid commute time if possible).

At Coyote Lake Harvey Bear Ranch County Park you’re mostly done with the traffic. Head uphill on sometimes steep fire roads with nice views of the bay, the descend to Coyote Lake Road. Note that Lakeview Campground is around mile 14 of the route, if you’re attempting to link up from somewhere else and need a place to sleep. Otherwise, head out to Henry Coe State Park on low-traffic Gilroy Hot Springs Road.

At Hunting Hollow entrance to Henry Coe (mile 18.5), make a quick stop to self-issue a backcountry camping permit ($5 per person per night, cash). Then continue up Gilrow Hot Springs road another 2 miles to a gate (the one on the right, not the closed one on the left). Cross the logs at the pedestrian entrance on the left. Welcome to Henry Coe State Park!

Coit Road climbs manageably for a few miles to the junction with Mahoney Meadows Road. About halfway up this climb, at mile 23.7 of the route, is Coit Horse Camp. This makes a fine place to camp if there are no horses around, which there probably won’t be in this lightly used park.

Once you turn left on Mahoney Meadows Road, the first sign of things to come are some very steep downhills. You’ll descend via rolling steeps into the Los Cruzeros crossing of East Fork Coyote Creek around mile 27.5. Here there are a few nice campsites and probably some water to cross (depending on time of year).

Here the real work starts. I won’t lie, for the next four miles I spent a lot more time walking than riding. Actually walking is an understatement, I was grunting, sliding, and straining my way up slippery steep sections of fire road. Granted, I’m a small person with a bike that weighs roughly half my bodyweight when loaded. A fit rider with a better ratio there might have an easier time. Here are some numbers so you can decide for yourself: in a few places the route gains around 500 feet in half a mile, and the big climb gains 1200+ feet in 2 miles.

Partway through the climbing, you’ve turned left onto Poverty Flat Road, which you’ll follow uphill until it merges into Manzanita Point Road. The climbing eases up from around here to the Coe Park Headquarters entrance, where you can congratulate yourself: the hardest work is behind you!

Your reward is 8 miles of downhill on paved low-traffic Dunne Ave. Cross the bridge, turn right into the fancy neighborhood and retrace your tracks back to Anderson Lake Park, crossing Anderson Dam and cruising downhill as a final treat.

The RideWithGPS map above will get you through this route. Be sure to save it offline in the app, or download the gpx file to the navigation device of your choice. As always when riding in a remote area, bring a backup. It can also be nice to print and bring along this overview map for a sense of the bigger picture on paper.

The fire roads in Henry Coe are generally well signed, but the smaller trails can be overgrown, hard to spot, and inconsistently marked on electronic maps. There are a few places where it’s easy to miss turns and end up a few hundred feet downhill from where you’re supposed to be.

I would recommend that anyone adventuring in Henry Coe State Park invest in this excellent detailed map. It’s the only map that accurately shows the park’s extensive trail network, and the money paid goes to support the park.

Plenty of pavement, and some steep slippery rocky fire road; no matter what bike you pick, it’ll be the “wrong” one for a substantial portion of this route. Front suspension is definitely not necessary but wide-ish grippy tires are helpful.

I rode on a touring bike with dirt drop handlebars and 2.1 inch Vittoria Mezcal tires. I couldn’t keep the rear wheel in control on some of the downhills but I doubt any tire would have fixed that.

Your usual three season camping gear will be fine for Henry Coe. Note that the park does get colder than the rest of the Bay Area in winter, and hotter in summer. Packing as lightly as possible will be greatly rewarded on the steep climbs.

I chose to start this route in Anderson Lake County Park, even though it adds a touch of out-and-back to the loop. You could certainly park near E. Dunne Ave. and skip this section, but it’s kind of nice. It allows you to start on dirt, there are good views of the reservoir (especially crossing the dam on the way back), and the stretch of pavement from miles 2-4 is on nice low-traffic neighborhood roads.

Another option for the first few miles is to stay low, following Cochrane to Hill road and avoiding the climb. But parts of Hill road can be busy with no shoulder, so especially around commute time it can be a stressful couple of miles. The ride through the rolling hills above the reservoir is nicer.

Another alternative start, if you don’t mind flat paved car-free bike trail, is to link up with Coyote Creek Trail anywhere along its 20ish miles between Anderson Lake Park and south San Jose. It’s not exactly epic bikepacking, but if you want extra car-free miles or live somewhere in the area, it’s a pretty painless warmup and cooldown.

It should also be possible from Coyoto Creek Trail, without too much road riding, to link up with the trails to the south and west of the bay: Santa Teresa County Park, Almaden Quicksilver, Sierra Azul, and on up north along the Santa Cruz Mountains! Haven’t tried it yet but it’s definitely on the list.

This route barely dips a toe into Henry Coe State Park. If you crave more steep and rugged riding, there are numerous options to extend the loop deeper into the park on trails and fire roads, with plentiful dispersed camping throughout.

Spring is the best time to bikepack in Henry Coe State Park, with its moderate temperatures, abundant wildflowers, and plentiful water sources. The hills turn from brown to green and the landscape is downright idyllic. Depending on recent rains, some creek crossings might be high enough to be tricky.

Summer can be brutally hot, so plan water refills very carefully and expect a tough time on those steep climbs. There are also times of the summer – I remember July being one – where all the plants shed prickly bits that stick to your shoes and socks. This would be a horrible time to go bushwacking on smaller trails.

Winter can be a good time, but avoid riding singletrack within 48 hours of rain (this is an official park rule and helps keep the trails in rideable condition). Don’t get caught unexpectedly by the short daylight hours, and be prepared for sub-freezing temperatures in some areas and occasionally a light dusting of snow up high.