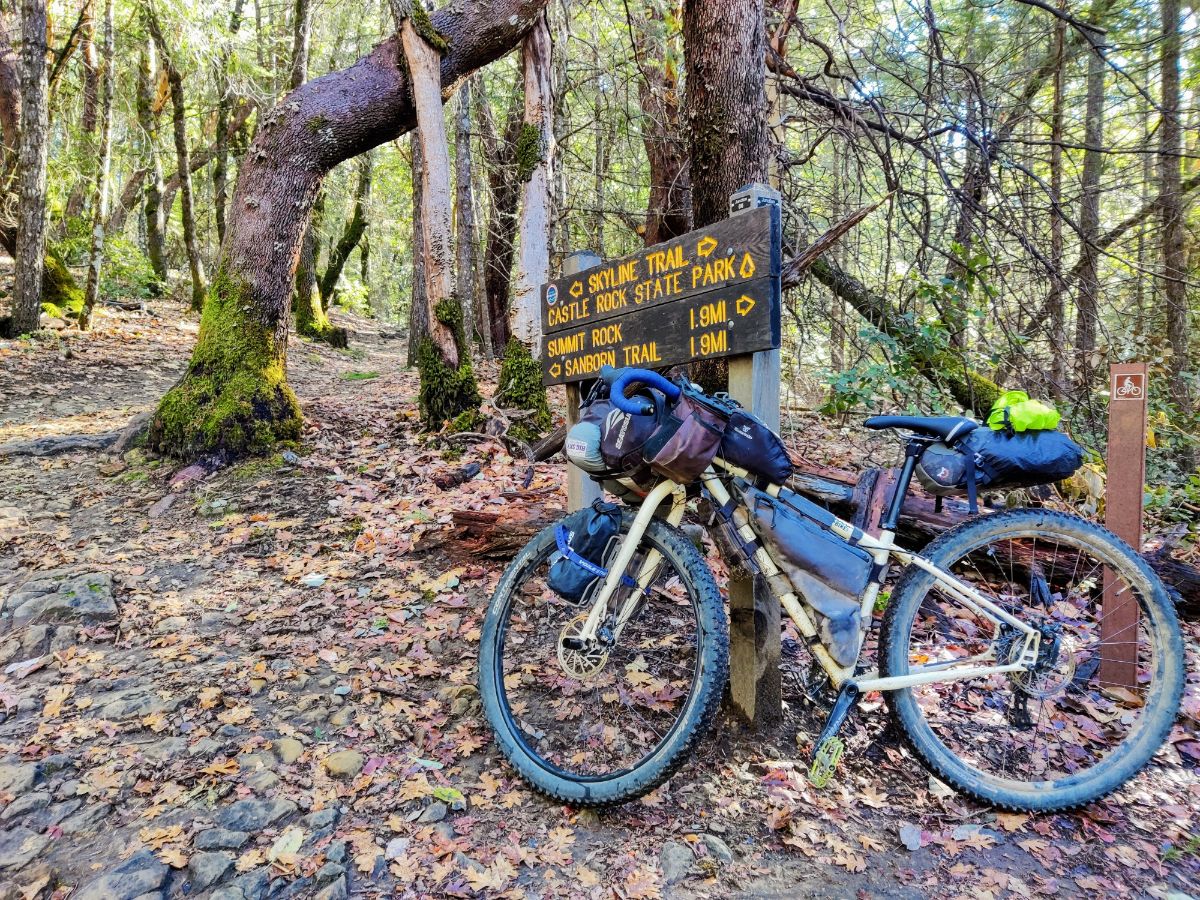 This varied loop takes you from suburban sprawl up to forested singletrack and back down again, punctuated by a peaceful night at Castle Rock Trail Camp.

The wide mix of surfaces, typical of bikepacking in the Bay Area, will keep you on your toes (sometimes literally, if you hike the steep parts). The hefty amount of climbing, almost all on the first day, will make you work for your peaceful night under the stars. And the long stretch of suburban bike lanes necessary to close the loop, while not as scenic as the ridgeline riding, is surprisingly approachable thanks to good cycling infrastructure.

Suggested Time: Two days: 24 miles and 42 miles. Despite the different mileage, these two days will take roughly the same amount of time.

By mileage this route is about 60% paved. The remaining 40% is mostly singletrack, including a nearly 20 mile segment along Skyline ridge, with some fire roads and gravel paths mixed in.

By time, I’d say it feels more like 40% paved. This is because the paved miles, being smooth and much flatter, pass far more quickly than the singletrack up on the ridge.

The singletrack is mixed and changes character often. In places it’s smooth and friendly, and in other places steep and rocky. Expect to be on and off your bike for short sections of hike-a-bike if you’re loaded and/or not a mountain biker, but don’t let that stop you from giving it a try.

The long section of singletrack that parallels Skyline Blvd can by bypassed by riding the road, and there are many places to hop on or off. But Skyline has no shoulder, fast (though fairly light) traffic, and sometimes limited sight lines. Road cyclists ride it all the time, but bikepackers may feel more comfortable on the trail even if it’s slower.

I’ve chosen the CalTrans Park and Ride lot as the start and finish, because it’s an easy landmark and it divides up the loop nicely. But you could start this loop in a nearly infinite number of places where you could easily leave a car overnight in a residential neighborhood.

I’ve mapped this route going counterclockwise, but I think it works either way. A few considerations:

Castle Rock Trail Camp is the overnight destination for this route. It’s a lovely hike-in / bike-in primitive campground with 15 sites, all with picnic tables and fire rings (sometimes fires are prohibited). It can fill up on summer weekends, but on a chilly December Friday I had the entire place to myself.

Sites must be reserved online through the Backcountry Trail Camps system. At time of this writing (2021) cost was $15 plus an $8 reservation fee.

Water: Castle Rock Trail Camp usually has water, but when I visited they had it turned off due to an issue with the system. There is seasonal water in Craig Springs Creek (see trail map) where it crosses Saratoga Gap Trail, and sometimes in a stream right beside the access road. Even more conveniently, there’s a drinking fountain at the main parking lot where you’ll check in.

Important note: Most of the pictures in this overview show the unpaved parts of the route, because I always forget to stop and take pictures of paved roads. Know that these pictures are not representative of the entire route, which is about 60% paved in terms of mileage (see Surfaces section above).

Beginning near the town of Woodside, you’ll ride good bike lane along Whiskey Hill, Sand Hill, Portola, and Alpine roads, all local road cycling favorites. Alpine Road quickly narrows to one lane and is closed to through traffic at the outskirts of town, leaving only local drivers and tons of cyclists who come for the mostly gradual, shaded climb.

Where Alpine forks with a private driveway, you’ll go to the right around a gate and enter the Coal Creek OSP trail system. This section is mostly well graded, but a washout has been routed around with a trail that offers a few short and steep challenges. Prepare to hike a bit here.

Popping out at Page Mill Road, it’s most straightforward to turn right and ride the road up to Skyline. If you’d prefer trail, you can cross to Monte Bello OSP and work your way along White Oak Trail (closed to bikes in winter) to pop out a bit further south along Skyline.

At the junction of Page Mill and Skyline, it’s easiest to turn left and ride the road briefly to Skyline Ridge Parking Lot, where you can hop onto the Bay Area Ridge Trail. To skip that short section of road riding, you could alternatively cross Skyline and turn left onto trail, but this section is full of short-and-steep rollers that will have you hiking.

Follow the Bay Area Ridge Trail through this section on a mix of trail and fire road, sometimes steep and sometimes gentle. When you hit Saratoga Gap Trail you’ll be on a long stretch of (mostly) singletrack that parallels Skyline Blvd all the way to the beginning of tomorrow’s descent. Some of this singletrack is smooth and some is a bit rocky.

To reach Castle Rock Trail Camp, turn right at the entrance to the gun club and then keep left at the fork, heading around the gate and down the dirt road for about a mile. But first, be sure to ride another 0.7 miles to the Kirkwood Parking Lot and check in with the ranger there, if requested when making your reservation. Enjoy your night at Castle Rock Trail Camp!

In the morning the climb back up to Skyline ridge will warm you up. Today’s remaining trail is often pleasant with just a few tricky sections. Before you know it you’ll hit John Nicholas Trail and a fun singletrack descent to a gravel road that leads out to paved Blacks Road. This is a short and steep descent to Lexington Reservoir, where the rush of freeway traffic may seem loud after your night in the forest.

Follow the popular gravel Los Gatos Creek Trail into town, and if you’re in the mood for a break, grab a meal. Then, begin working your way back north on a series of expressways and local streets with mostly good cycling infrastructure. The shoulders are wide and you’ll see plenty of other cyclists out on these streets. Pass Stanford University, continue through Menlo Park, and before you know it you’ll turn left on Woodside Road and close the loop!

This route covers everything from smooth pavement to dirt singletrack, so there’s no such thing as the perfect bike. I rode my rigid Salsa Fargo (drop bars) with 29×2.3″ tires, because that’s what I had set up. I found it to be a good happy medium as usual.

Mountain bikers might wish for a hardtail on a few sections of the singletrack, but might regret the choice while riding all the flat pavement. A gravel bike would work great for the pavement and smooth trail, but the singletrack will require more care. Pick your poison!

You can ride this route year round, though it’s best not to ride for a few days after heavy rain. The trails will be muddy, and riding them in this state damages the trail surface and makes it rougher when it dries.

Winter can be chilly, meaning nighttime temps could dip below freezing and a light dusting of snow is occasionally seen on Skyline ridge.

A few of the trails on and near this route, particularly in Monte Bello and Long Ridge OSPs, are closed to bikes during rainy periods. You can route around them by riding on Skyline Blvd.

Parts of this route have substantial traffic, including 20+ miles of suburban roads (all with a wide bike lane / shoulder) and parts of Skyline Blvd (lighter traffic but no shoulder) if you choose to bypass any sections of trail. A red blinking tail light and high-viz clothing are highly recommended.

Don’t underestimate the climbing on the first day of this route! It will probably take longer than you expect. The section along the ridge is not as gradual as it appears on the elevation profile; there is plenty of up and down along the way.

All these trails are heavily used by hikers, bikers, dog walkers, etc. especially on weekends. Prepare to yield when necessary and receive a few puzzled looks – and if you’re lucky, some curious conversation – from day hikers and cyclists wondering why you’re so loaded down with gear.

This overnighter follows roughly along the middle section of the SF Peninsula Traverse, and could certainly be extended in either direction to include more of that route.

You could look into making this a point-to-point using Caltrain, but that adds almost as much urban riding as it cuts out because you’ll have to head further east to reach the Caltrain line.