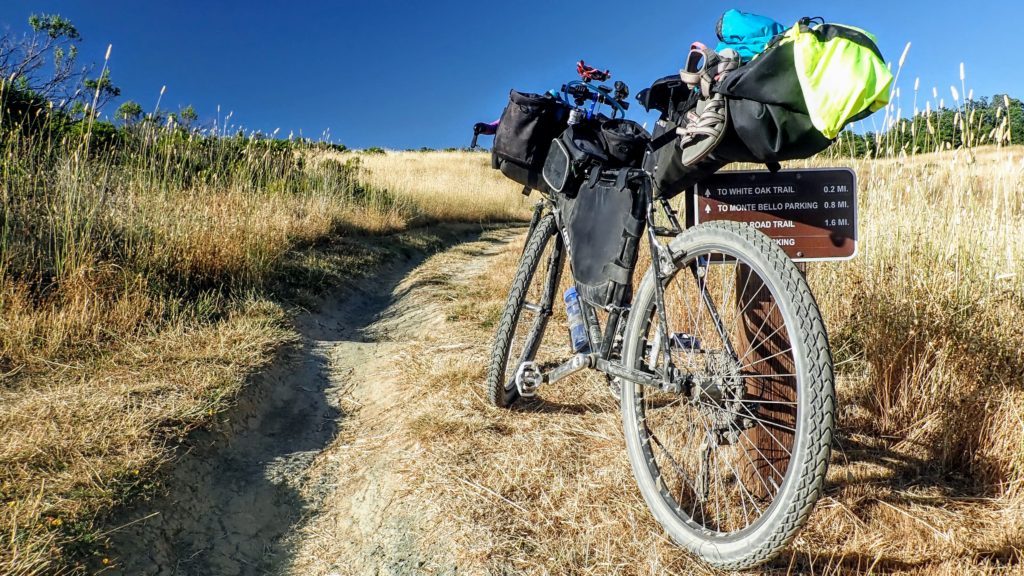 As I watched the sun set glowing red from my rocky perch on Black Mountain, the San Francisco Bay Area already twinkling in the fading light across the valley below, I couldn’t help thinking “I win!”

Spread across the valley below me were the lights and lives of over half a million people, crammed into unending suburbs, fuming on gridlocked freeways, chatting about their workdays over dinner. Yet I was alone at the top of the mountain. And it was a Thursday night.

If you live on the SF Bay Area peninsula and are craving a quick bike camping trip or S24O-style bikepacking overnight, this little bikepacking route to Black Mountain Backpack Camp might be just what the doctor ordered.

On long summer days you can leave after work, be at Black Mountain Backpack Camp by sunset, and be back down again the next day in time for your morning meeting. Depending on where you live and work, you might not even need a car.

Read on to plan a Black Mountain mini-bikepacking trip, including details about the campsite, route options, and trail conditions.

Black Mountain Backpack Camp is located in Monte Bello Open Space Preserve. Though this little 4-site campground is not exactly wild and remote – it’s a popular place for parents to take young kids on a first backpacking trip – it’s a nice perch at the top of a satisfyingly high hill with pretty views. It’s also one of just a couple legal camping options on the SF bay area peninsula.

The campground has four sites, a pit toilet, and a spigot with non-potable water. Each site has a food storage locker and log seats. Campfires are not allowed but camp stoves are. Sites are relatively well shaded, but fairly close together, so don’t expect solitude unless you get lucky and have the whole place to yourself.

You do need to reserve a permit in advance, but on weekdays they are usually easy to get. They cost $2. What else can you buy for $2 these days? Apparently just a peaceful night under the stars.

The best thing about the campground in my opinion? It’s less than half a mile from the summit of the evocatively named “Black Mountain.” Not to disappoint you, but Black Mountain is actually a hill covered in grass with some radio towers on top. But, the sunset view is really nice. I highly recommend an evening stroll or ride up to the top for sunset.

The worst thing about the campground can be mosquitoes and tiny flies. You might want to bring some bug repellent or citronella if that kind of thing bothers you.

There are actually several bike routes up to Black Mountain Backpack Camp. First I’ll go through my favorite in detail, then mention some extensions and more pavement-focused alternatives below.

The route I recommend starts in Windy Hill OSP, climbs Alpine Road to Coal Creek Preserve, then crosses into Monte Bello for the final climb to Black Mountain. It’s short in distance at only about 9 miles, but it packs a punch with nearly 2500 feet of climbing. It’s a majority singletrack, though most is not very technical. There are also plenty of options to extend it on either end, which I’ll go through further below.

The route starts at the Windy Hill Open Space Preserve parking lot on Portola Road. Don’t worry, you don’t have to ride up steep Windy Hill (well you could, but then you’d have to ride along Skyline / highway 35, not recommended). You simply ride through the lower portion of the preserve on mellow fire road for about a mile. Consider it the warmup.

After a mile you’ll turn right on Alpine Road, a paved steady climb with very light traffic. Ignore the signs telling drivers there is no access to Skyline. That may be true for cars, but bikes can get through and the route is legal and popular with cyclists.

After about 2.5 miles on Alpine, you’ll reach a private road on the left and a dirt pullout and trailhead on the right. This is Coal Creek OSP, where the fun starts. The next 2.5 miles are a steady climb on singletrack, mostly not too technical, but there are a few tricky sections. Some of the tricky sections are lined with poison oak on both sides. Don’t say I didn’t warn you.

At the top you’ll pop out at Page Mill Road. Cross it, and you’re in Monte Bello Open Space Preserve. Here the riding gets easier with some gentle rolling downhill and smoother trails, except for a few minor rocky sections. Follow the RideWithGPS route and/or take a trail map with you, because not all trails in Monte Bello are open to bicycles.

A mile and a half from the top, the final climb starts. Some parts can feel steep depending on your strength and load, but you’re almost there.

Black Mountain Backpack camp is situated between the trail and Monte Bello fire road. Congratulations! Choose a campsite and let the relaxing evening begin. If you still have energy to burn, stroll or ride uphill toward the radio towers and tag the summit of Black Mountain.

The next day, unless you’re tackling an extension described below, just retrace your wheel tracks back the way you came. It’ll be mostly downhill, pretty smooth and easy. You might even make it to the office without breaking a sweat.

If you don’t turn your nose up at pavement, there are several good ways to extend the ride by 10 or more miles each way starting from the flatlands of the peninsula. I suggest turning on the bicycle layer on Google Maps and having a look at how the green lines connect from your home or office to Portola Road.

From the east, you can ride Alpine Road to Portola Road, starting from Alameda de las Pulgas or Junipero Serra. Another option is Page Mill or Arastradero; you could even cut through the trails of Arastradero Preserve on the way.

From the northeast, you can connect to Portola Road from Sand Hill.

From further north, you can even approach via Cañada Road, meaning you could theoretically come all the way down from San Bruno or even Pacifica on bike paths and bike lanes.

The roads mentioned above all have reasonable bike lanes, except Arastradero, though you can cut most of this out by riding through Arastradero Preserve. The bike lanes can be narrow at times though, and traffic can be constant. Cyclists accustomed to road riding will probably be comfortable, but I wouldn’t necessarily bring new riders or young kids along. No matter who you are, the ride will be more pleasant if you avoid peak commute times.

From the trails around Black Mountain Backpack Camp, it’s possible to bike up to the Skyline ridge trail network and a lot of great fire road and singletrack. Three linkage options:

From these trailheads on Skyline Blvd, you can take bike-legal trails and the occasional small road all the way south to Lexington Reservoir, and even further into the notoriously steep fire roads of Sierra Azul. I haven’t fully scouted this yet, and camping options might be tricky to find, but it’s definitely on my list.

Monte Bello Road: You can also approach Black Mountain from Saratoga via Stevens Canyon and Monte Bello roads. This is basically a road ride with a little bit of gravel. From where the real climbing starts, it’s about 2300 feet of elevation gain in 7 miles. The route does pass by several wineries, for whatever that’s worth.

While enjoying the sunset at Black Mountain I met two guys on road bikes who came up this way for an evening ride. They told me they’d also bike camped at Black Mountain Backpack Camp before, one of them hauling a 100 pound trailer filled with several bottles of wine and who knows what else behind his road bike. So if that’s more your style, it works too.

The trail route through Rancho San Antonio OSP, while temping, is not open to bikes.

For the singletrack sections, a hardtail mountain bike might be nice but isn’t essential. I rode my mutant touring bike, a Surly Long Haul Trucker with Cowchipper drop bars and 2 inch tires, and mostly did fine. Since I’m still getting used to my bikepacking bags and SPD pedals, I got off and walked a couple short stretches, no big deal.

These trails can be really hot in the summer, especially on unshaded climbs. Bring plenty of water. There is a drinking fountain at the Windy Hill Trailhead parking lot on the side closest to Portola Road. The water at Black Mountain Backpack Camp is supposedly not potable, so bring a filter or chemical treatment for camp.

I hope this inspires fellow bay area bikepackers to get out for a little jaunt to Black Mountain Backpack Camp. I’m always amazed by how good it feels to get out on the trails, even for less than 24 hours, especially when living in such a crowded place as the SF Bay Area.

Though the climbing prevents this route from being an easy ride, it would make a good first bikepacking overnight for a more experienced day rider who wants to try bike camping, or a quick escape for a more experienced bikepacker short on time. If you try it out, let us know how it goes in the comments below.