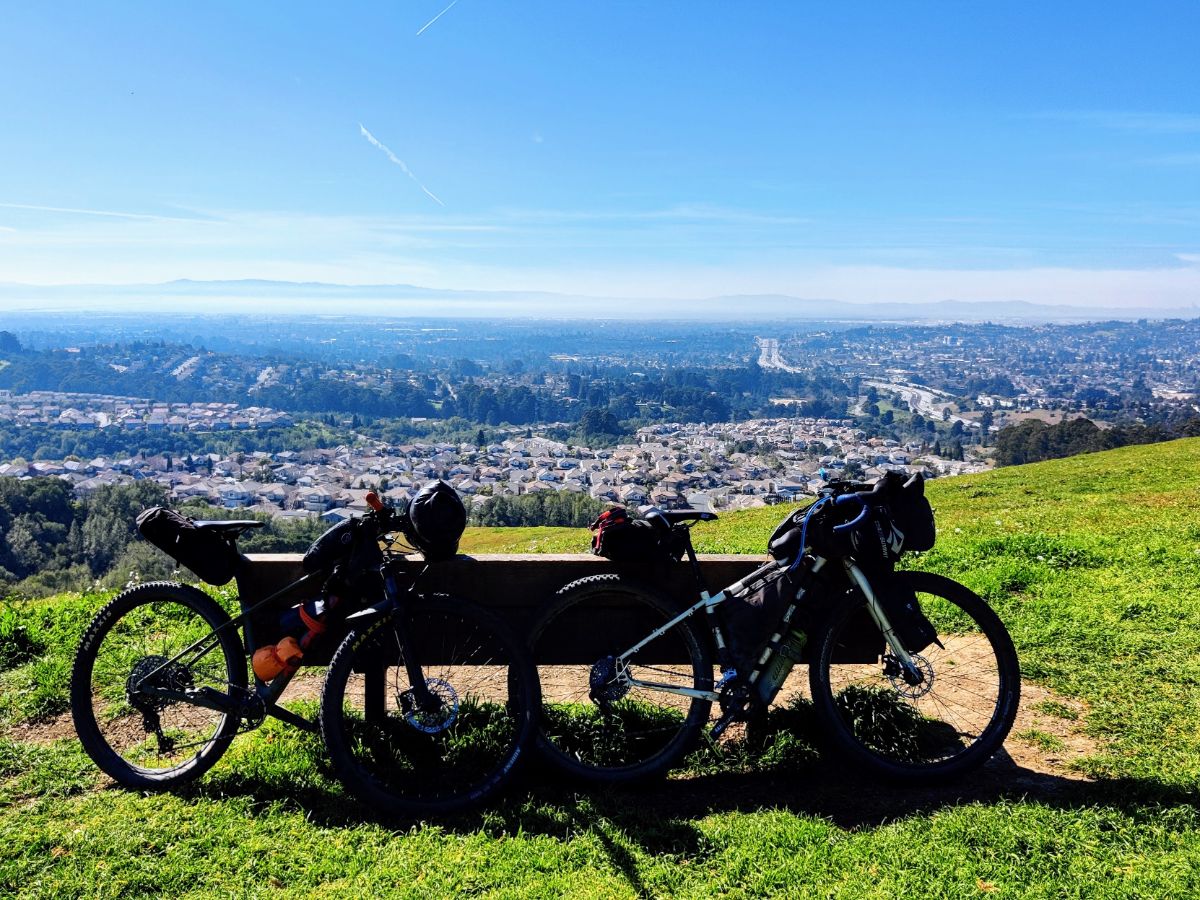 Since the Richmond – San Rafael Bridge opened to cyclists in 2020, I’ve been dreaming of a triple bridge adventure that tags all the bike-accessible crossings of the bay. I was originally planning to map something out on my own, but when bikepacking.com published the Bay Area Triple Crossover I decided to take advantage of someone else’s hard work and just follow their published route.

I rode the 160 mile Triple Crossover with a friend in late February 2022. We had great weather and a great time despite short winter days and a somewhat rushed itinerary. It wasn’t exactly a peaceful wilderness getaway, but it was an engaging adventure with plenty of local Bay Area flavor. This ride report shares our itinerary, impressions, and pictures from the route.

I think this is a great route and an excellent bikepacking asset for those of us who live in the Bay. As a resident of the peninsula I’ve been to many of the areas, but linking them up by pedal power gave me a more visceral sense of the Bay’s diversity. It was almost disorienting to cross so quickly from neighborhood to neighborhood, park to park, city to city.

Riding across each impressively engineered bridge, I could feel the difference between the communities on either side. I could also feel – and hear and smell and see rushing at me – the flow of constant traffic linking them. While crossing countless entrances to suburban open space preserves, I glimpsed what the land would have been like before all the houses and offices were built.

The vibe is urban and suburban exploring, with a side of nature. For all the time the route spends in open space preserves, it’s never more than a few miles from a trailhead and parking lot full of local joggers or dog walkers. Sections of trail and fire road are linked by frequent pavement connectors and three impressive but intense bridge crossings. There’s a lot going on, and the mood changes quickly.

What I didn’t love:

Physically speaking, this is not an easy route. Don’t be fooled by the flatness of the lowlands; the surrounding hills and ridges are formidable. The 160 mile route has nearly 15,000 feet of climbing. This might not seem excessive, but consider that around 60 miles are flat paved crossings of bridges and lowland suburbia. That leaves a lot of elevation gain to cram into the remaining ~100 miles, which are mostly on dirt.

There’s not much technical trail riding, but most riders should expect some hike a bike on steep climbs and short rocky sections. We were off and on our bikes frequently, especially in parts of the north and east bay. Depending on current trail conditions, some sections can be annoyingly rutted and cow-trampled, which will definitely slow you down.

Traffic: By “bikepacking” standards there is a lot of road riding on this route. Often there’s a bike lane or traffic is light, but not always. A certain amount of road riding confidence is needed to enjoy the route, and I’d suggest bringing all your favorite safety gear (lights, bright clothes, helmet mirror, etc.). Fortunately all three bridge crossings have separated bike paths, but the fast traffic very nearby can still feel a bit intense.

The route description recommends 3-4 days. We did it in three days, and with short winter daylight hours our ride felt a bit rushed. We woke with the sun and pedaled hard until just before dark on the first two days, and finished in the dark on the third night.

With long summer daylight hours, four days, or both, it could have been a more leisurely ride with long lunch breaks and relaxing mornings at camp. Unless you’re a strong rider with a fairly light load, and/or looking for a challenge, I’d recommend four days.

The route can be ridden year-round, but there are a few things to consider:

Bikes: There is no perfect bike for this extremely varied route. I rode a rigid Salsa Fargo, which was great for the gravel and smooth trails, ok for pavement, and “meh” on the bumpy sections. My friend rode a hardtail which was great for the bumpier sections, fine for gravel, and “meh” on pavement. You could do the route on a gravel bike if you’re prepared to take it easy on the rocky North Bay fire roads and the rutted, cow-stomped dirt of the East Bay.

Safety: Be visible! I suggest at minimum a flashing red tail light and brightly colored shirt or vest. By “bikepacking” standards there is a lot of road riding. Often there’s a bike lane or traffic is light, but not always.

Lights: If riding on a three day schedule outside of long summer daylight hours, bring a good headlight! You may find yourself finishing each day in the dark.

Pack light! There’s a lot of climbing on this route.

The route description has good information about logistics. Here are a few additional notes.

Water: You don’t need a water filter for this ride. I carried a few chlorine dioxide tablets just in case but didn’t use them. It’s easy to refill from stores and drinking fountains. I recommend carrying around 2 liters at a time when the weather is cooler, and 3 liters when it’s hot during the summer.

Food: We carried a stove and dehydrated meals because we enjoy cooking at camp, but you could probably do this route without one. Most of the resupply opportunities are on day 2 (if following our itinerary) and the end of day 3.

Transportation notes: Starting from almost anywhere on the peninsula, you can take Caltrain to San Francisco. All trains have bike cars and there is no extra charge. Do note that you’ll need to quickly carry your loaded bike up a few stairs onto the train – you might need a boost from a friend or kind stranger. From the Caltrain Station at 4th and King, it’s a fairly easy and safe 7 mile ride to the start of the Golden Gate Bridge. Here’s the route I took.

Camping notes: Samuel P. Taylor has a Hike & Bike campsite. No reservations needed, but bring exact change to pay the fee (currently $7 per person). It’s a nice site with flush toilets, picnic tables, even a power outlet in the restrooms. It can be chilly at night in the winter.

Camping notes: Sibley Backpack Camp is a nice little site surrounded by eucalyptus trees. There’s only a single site and you’ll need to reserve it in advance – book early for weekends. More info here. There’s no water, but you can fill up beforehand at the Tilden Steam Train parking lot, or ride 0.2 miles past the campsite to the Sibley Preserve parking lot and then back to camp.

Because we were short on time, we skipped the last few miles of the route and just rode to the nearest Caltrain station after crossing the Dumbarton Bridge.

Transportation Notes: Since we were short on time, we ended our ride at the Palo Alto Caltrain station instead of continuing south along the bay. If you go this way, Willow Road is the most bike-friendly route. From there my friend caught the train to SF and I rode home.

As mentioned above, three days during the short daylight hours of February was a little rushed. If you do this route in four days, it makes the most sense to break it up as follows: